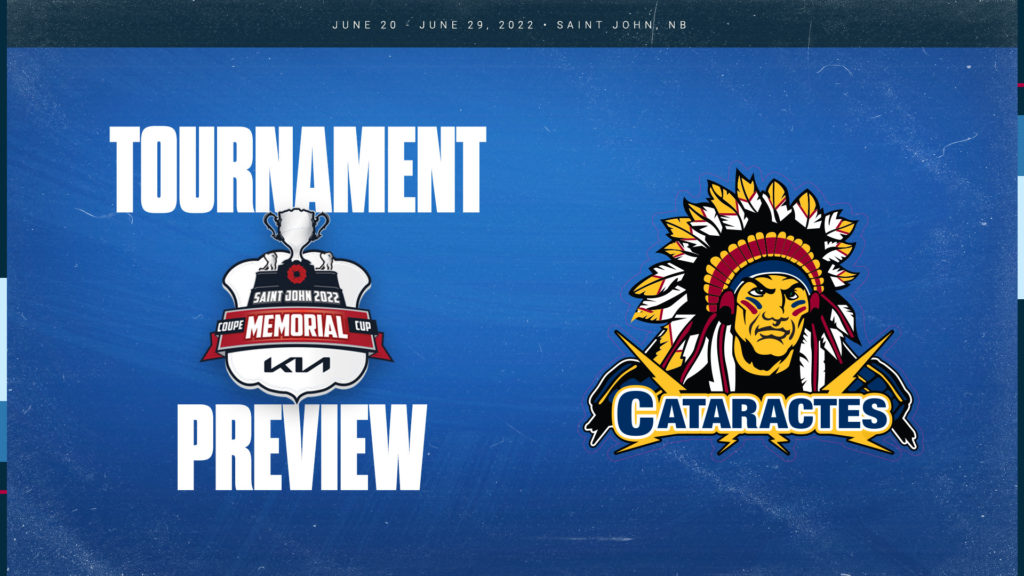 How they got here

You could argue that against all odds, the Shawinigan Cataractes are at the 2022 Memorial Cup presented by Kia.

And frankly, they’re ok with that.

The Cataractes had the seventh best record in the QMJHL regular season. They ended the Q Playoffs with the first President Cup in franchise history.

The momentum built quickly in the postseason as the Cataractes stormed through the first two rounds after sweeps over Rouyn-Noranda and Gatineau.

It set up a showdown with the Quebec Remparts who led the QMJHL in wins (51) and points (104) during the regular season. Down 2-1 in the series, captain Mavrik Bourque scored the overtime winner to force a Game 5 where the Cataractes took down the top seeded Remparts 5-3 behind a Pierrick Dube hat-trick.

In just their fourth ever appearance in the President Cup, the Cataractes won the league title in Game 5 over the Charlottetown Islanders as they made franchise history with the first President Cup in their 53-year history.

Bourque, and fellow star Xavier Bourgault, were both drafted by the team, alongside eight others, while Dube and Zachary Massicotte are among the eight players acquired via trade.

The BB connection has been pheonominal for the Cataractes with Bourgault and Bourque combining for 21 goals and 47 points in QMJHL Playoffs.

Bourque, the 30th overall pick in the NHL Draft by the Dallas Stars in 2020, won the Guy Lafleur Trophy as the QMJHL Playoffs MVP after his 25 points set a franchise record for one postseason.

Bourgault, an Edmonton Oilers first round selection in 2021, had five game-winners in the postseason as his 12 goals were tied for the second most in the QMJHL Playoffs.

Dube also potted 12 goals throughout Shawinigan’s run to the President Cup while Olivier Nadeau, a Buffalo Sabres prospect, played at a point-per-game pace in 16 contests.

Martin Has is the team’s fourth and final NHL prospect while Angus Booth is eligible for the 2022 NHL Draft and was named the 92nd ranked prospect in North America by the NHL’s Central Scouting.

“[Our approach] doesn’t change at all. The best way to be successful is to focus on that one game. “You’ve got one chance to play one good shift, one good period. If you focus on today and make the most out of the day, you’re going to be successful.”

“We have a lot of confidence. We had a lot of comebacks … everyone thought we were going to lose and we’ve found a way to win. When we have the chance to make it count, we’re taking advantage.

“Every game is very important. It’s like a Game 7. We don’t know them and they don’t know us. Every shift, every period will be important.

“We’re feeling good. We’ve been waiting for this for a while … we play our best when everybody has fun. We play hockey for fun and we have a great group of guys.

“We just need to be able to be in the present moment. It’s not easy when you’ve just won a championship and you have to represent your team after. We had fun the first couple of days but after that we got back to work and we will bring the momentum we had from Charlottetown to this tournament.”

It took 53 years, but the Shawinigan Cataractes are President Cup champions.

However, they will look to now secure their second Memorial Cup title. The Cataractes won the 2012 tournament as hosts after they beat London 2-1 in overtime on Anton Zlobin’s winning goal. They also competed in the 1985 tournament where they also hosted.

With a deep history, the Cataractes have seen 73 players selected in the NHL Draft including notables such as Samuel Girard (NSH/2016), Anthony Beauvillier (NYI/2015) Jason Pominville (BUF/2001) and Sergio Momesso (MTL/1983).

Patrice Lefebvre holds the franchise record for points (595) and assists (408) while Stephan Lebeau’s 281 goals are a team best.

Jean-Phillippe Pare played 335 games for the Cataractes while Mathieu Choinard is the only goaltender in franchise history to record at least 100 wins (104).