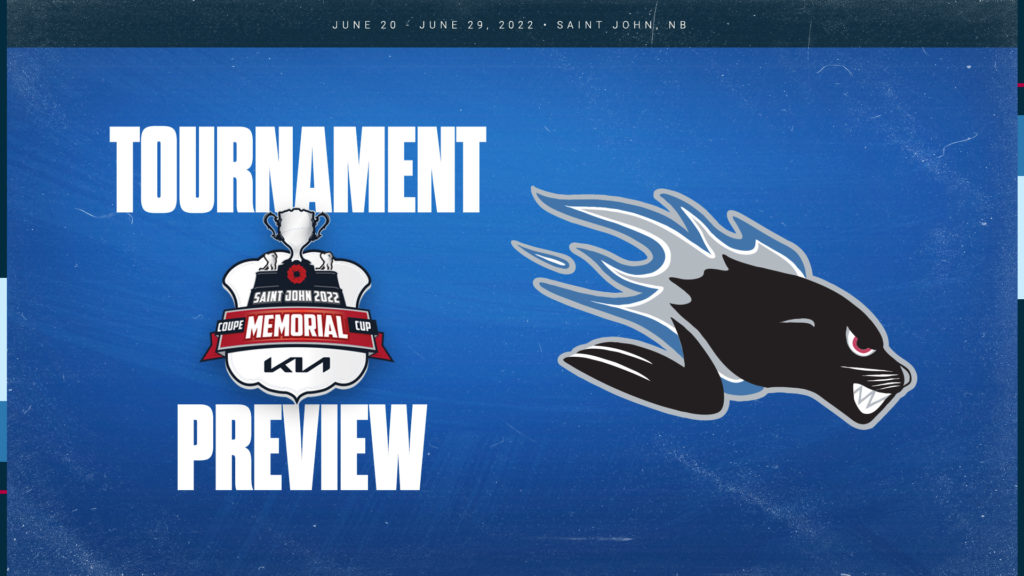 How they got here

As hosts of the 2022 Memorial Cup presented by Kia, the Saint John Sea Dogs’ spot at the tournament has been locked in for quite some time.

And with that in mind, the team went all out at the 2022 QMJHL Trade Deadline.

After a 1-3-1 start post-deadline, the Sea Dogs ended the 2021-22 season by winning 26 of 28 games to finish the regular season with the third best record in the QMJHL.

However, their postseason ended in the first round as they were beaten 3-2 by Rimouski in a decisive Game 5.

Despite their short-lived playoff run, they possessed the most lethal offence in the CHL with 311 goals scored. They concluded the regular season in fifth spot in the CHL Top 10 and spent four weeks ranked.

But make no doubt about it, the Sea Dogs are the wild card at the 2022 Memorial Cup presented by Kia. The team hasn’t played a game since May 12 and made a splash 12 days later as they replaced head coach Gordie Dwyer with University of New Brunswick (UNB) legend, Gardiner MacDougall, who will coach the team only in this tournament.

Unsurprisingly, almost half of Saint John’s roster was assembled via trade as 10 players were acquired from other teams. Eleven members of the Sea Dogs roster were QMJHL draft picks. Yan Kuznetsov is the team’s lone CHL Import Draft selection.

Dufour had a sensational season where he set a franchise record with 116 points and with 56 goals, became the first 50-goal scorer in Sea Dogs history. He was rewarded at season’s end by collecting the Michel-Brière Trophy as QMJHL MVP.

However, Dufour wasn’t the only 100-point scorer this season for Saint John as Josh Lawrence exploded for 101 points and set a franchise record with 70 assists in one season.

Ansoms tallied 36 points (12 goals) in 37 games after he was acquired from Baie-Comeau while Daoust’s season started in the professional ranks with the AHL’s Belleville Senators before he recorded 24 goals in 38 games with Saint John.

On the blue-line, Poirier and Villeneuve tallied 57 and 56 points respectively during the regular season while fellow d-man Sevigny had 36 points in 37 games after he was acquired Dec. 20.

“The last month has been an exhilarating experience for everyone. (Our players) went through probably the most adversity they have had. They have proven that they can be very successful in the regular season. I give full credit to the players as they have been very receptive and the buy-in has been terrific.

“This is the most prestigious amateur tournament in the world. I’ve been a big fan of it for many years. To get that opportunity to be part of it and try to make a difference with our group is life time … it’s a big challenge but I am looking forward to the tremendous opportunity.”

“It’s an event that happens once in your life. We want to have fun and enjoy every day … we have been training and practicing for months. We’re always together. We have done some activities outside of the rink. The chemistry is very good.

“We have changed so many things [with Gardiner]. Our work ethic, little details in practice … things we were not doing during the season that cost us in the playoffs. We’re ready, in top shape and we have no excuses.”

“We’re looking to win the tournament and some hockey games but also to have fun. We are here to play in the biggest tournament in junior hockey.

“We have to learn from our mistakes [in the playoffs] and not redo it. If we play as a team, we will have success for sure.”

Additionally, they have one Memorial Cup title after they reigned supreme in 2011 on a team led by now Florida Panthers star Jonathan Huberdeau.

With a successful history, the Sea Dogs have seen 29 players selected in the NHL Draft with Thomas Chabot, Jakub Zboril (both 2015), Huberdeau (2011), Nathan Beaulieu (2011) and Simon Despres (2009) all being chosen in the first round.

Huberdeau’s 257 points are a franchise record while Michael Kirkpatrick’s 108 goals is a team best. Matthew Highmore owns the Sea Dogs assist record with 157 while Spencer Smallman leads the list in games played with 293.

Between the pipes, Sebastien Auger’s 77 wins are the most.