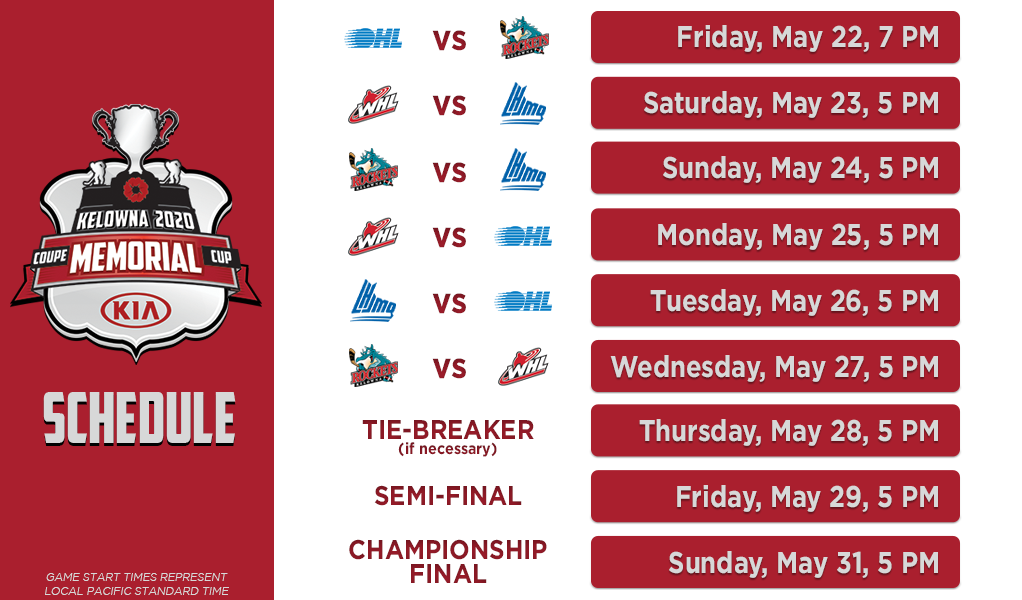 Toronto, ON – The Canadian Hockey League in association with the 2020 Memorial Cup Presented by Kia Host Committee have confirmed the schedule and start times for the 102nd edition of the league’s prestigious national championship which takes place May 21-31 in Kelowna, British Columbia.

The host Kelowna Rockets open action against the Ontario Hockey League champions on Friday May 22 at 7:00 pm, followed by a Saturday afternoon battle between the Western Hockey League and Quebec Major Junior Hockey League champions at 5:00 pm.  Round-robin competition continues through Wednesday May 27, with a Tie-Breaker Game slated for Thursday May 28 if needed, a Semi-Final to be played on Friday May 29, followed by the Championship Final set for Sunday May 31.  All game times following the tournament opener will be at 5:00 pm Pacific Standard Time.

Since the round-robin format of the event was introduced in 1972, the WHL has won a total of 19 Memorial Cup championships beginning with the 1974 Regina Pats and most recently the 2014 Edmonton Oil Kings.  OHL teams have won 17 times under the current model including the 2017 Windsor Spitfires, while QMJHL clubs have celebrated 12 titles including the Acadie-Bathurst Titan at the historic centennial celebration in 2018 and last year’s Rouyn-Noranda Huskies.  During that time a total of 10 teams have hoisted the Memorial Cup on home ice including the 2004 Rockets.

The Memorial Cup has a rich tradition that has shaped the way junior hockey is played in North America.  The trophy was originally known as the OHA Memorial Cup and was donated by the Ontario Hockey Association in March, 1919, in remembrance of the many soldiers who paid the supreme sacrifice for Canada in the First Wold War.  In 2010 the Memorial Cup was rededicated to the memory of all fallen Canadian Military Personnel.

The 2020 Memorial Cup Presented by Kia is supported by Kia Canada and associate sponsors which include CIBC, Real Canadian Superstore, Cooper Tires, and Kubota Canada.

Ticket packages for the 2020 CHL Memorial Cup presented by Kia are on sale to the general public at the Select Your Tickets Box Office, by phone at 250-762-5050 or online at selectyourtickets.com.

Where Are They Now: A look back at the 2011 Memorial Cup champion Sea Dogs
4 weeks ago