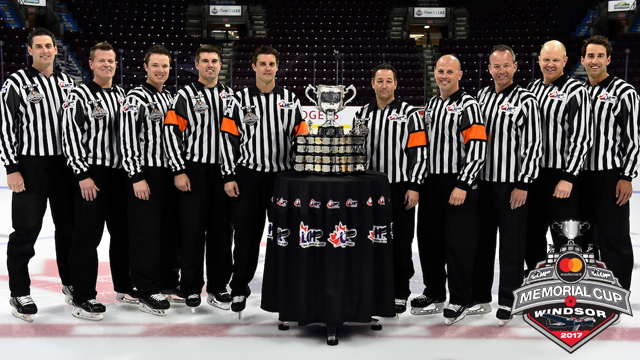 Windsor, ON – The Canadian Hockey League today announced the officiating team for the 2017 Mastercard Memorial Cup in Windsor.

Linesmen selected to work the 2017 Mastercard Memorial Cup include Geoff Rutherford from nearby Lasalle, ON, along with Adam Harris (Hamilton), Andrew Jackson (Caledon), Justin Knaggs (Whitby), Dustin McCrank (Guelph), and Andrew Smith (Kitchener).  McCrank previously worked the 2014 Mastercard Memorial Cup in London, while all five other officials have been assigned to their first championship.

Number of CHL seasons in brackets

The Memorial Cup was donated in 1919 by the Ontario Hockey Association as a memorial to those young men and women who had been given their lives in the defence of Canada during World War I.  The 2017 edition of the championship in Windsor marks the 99th time this prestigious trophy will be presented.

The 2017 MasterCard Memorial Cup is proudly supported by Mastercard, title sponsor of this event for 19 straight years.  Associate sponsors include CIBC, Cooper Tires, and autoTRADER.ca.