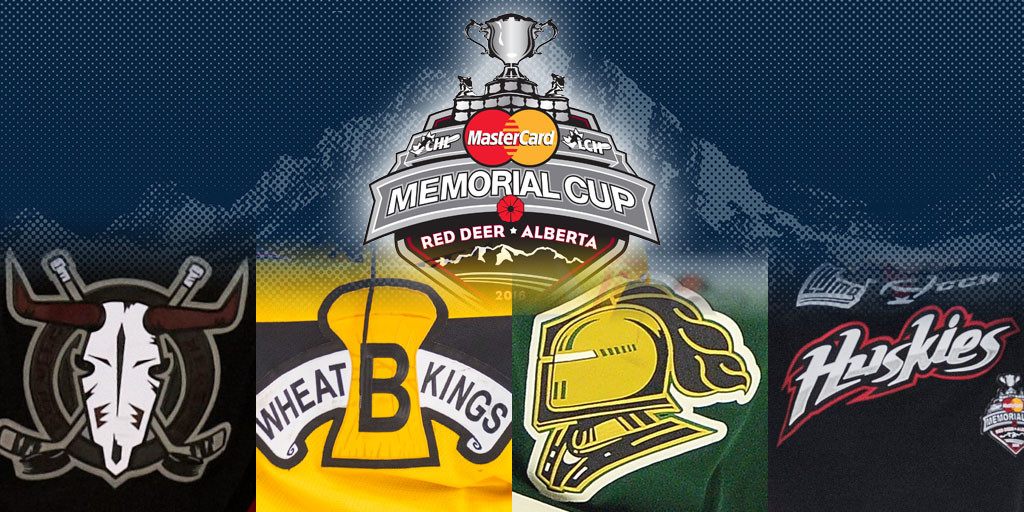 The puck drops on the 98th MasterCard Memorial Cup on Friday at the ENMAX Centrium in Red Deer, AB as the hometown Rebels take on the OHL Champion London Knights at 6:00pm MT/8:00pm ET.

Here’s an overview of all four competing teams battling for the Canadian Hockey League’s ultimate prize, the Memorial Cup.

After months of excitement and anticipation, the moment is finally here as the Red Deer Rebels take to the ice on Friday to kick off the MasterCard Memorial Cup on home ice.

An eager Rebels club hasn’t been idle since being eliminated from the WHL Playoffs by the Brandon Wheat Kings on April 29th. Long-time head coach and general manager Brent Sutter and his staff have kept the team sharp as they prepare to face the best the CHL has to offer over the course of the next 10 days.

“We were doing two-a-days starting at 6:30am and then another practice later in the afternoon, so we’re in the zone,” said Boston Bruins prospect Jake DeBrusk. “We’re counting down the hours. It’s very exciting.”

A key mid-season acquisition by Sutter, DeBrusk joins veteran teammates in Luke Philp and Adam Helewka as talented additions to a Rebels club that has set its sights on putting forth a competitive squad for the upcoming national championship.

While the veteran trio had to adapt to their new surroundings, things came together fairly quickly.

“Guys like Helewka, Philp and myself didn’t know these guys when we came in, but we bonded right away,” DeBrusk continued. “I know I speak for all three of us when I say that this is the opportunity of a lifetime for us and we’re all glad we’re here.”

The Rebels finished the 2015-16 season ranked sixth in the WHL with a record of 45-24-1-2. They got by the Calgary Hitmen and Regina Pats before running into the Brandon Wheat Kings in the Eastern Conference Championship Series, one they lost in five games.

The MasterCard Memorial Cup marks a new opportunity for the hometown Rebels. With the city behind them and home ice advantage in every game, there’s good reason to think they’ll come out playing with a purpose.

“There’s a real buzz around town,” added veteran Adam Helewka, a 42-goal scorer acquired mid-season from the Spokane Chiefs. “Hearing all the talk from billets and friends and seeing things come together has been exciting. We’re looking forward to getting the puck dropped.”

Discipline will be key for Red Deer, whose 77% penalty kill ranked 18th in the WHL this season. That figure remained at 77.8% throughout the playoffs.

“No doubt, our PK has been a work in progress,” DeBrusk noted. “All of these teams are league champions with dangerous power plays, so we have to be disciplined and limit their opportunities with the extra man. There are going to be penalties in games though, and mistakes happen, so we have to be prepared to kill and get the job done there.”

The Rebels get the 98th MasterCard Memorial Cup, their second appearance in franchise history, started at against the OHL Champion London Knights on Friday at 6:00pm MT/8:00pm ET, a game that can be seen across the country on Sportsnet.

After coming within four wins of a WHL championship last spring, the Brandon Wheat Kings put an end to their 20-year title drought last week, eliminating the Seattle Thunderbirds in five games to be crowned WHL champs and advance to their sixth MasterCard Memorial Cup tournament.

This team looks to put the past behind them as a deep group of scorers led by sophomore star Nolan Patrick, talented shooter Jayce Hawryluk, New Jersey Devils prospect John Quenneville and a cast of others comes to Red Deer with their eyes on the prize.

“It’s a huge event,” said Hawryluk, who signed an entry-level deal with the Florida Panthers in March. “We’re a little bit nervous, a little bit anxious but that’s to be expected. We’re looking forward to Saturday’s game.”

Hawryluk and Patrick became the first set of Wheat Kings teammates to record 100+ points in 20 years this past season, propelling the WHL’s top-ranked offence to a 319-goal finish.

“We have a team that works extremely hard,” said Hawryluk when asked for the secret behind the team’s success. “I think we listen and apply what our coaches want and every guy in our lineup from top to bottom competes as hard as he can. To be successful you need to have guys who are buying into the system and playing the way the coaches want us to play.”

“I’d say we’re probably not as prolific offensively as we were last season,” said veteran head coach and general manager Kelly McCrimmon on Thursday. “In fact, I think a lot of people overlook our defensive strengths because we do score so much. We’ve thrived in those close, one-goal games this year and done the things defensively to win tight hockey games.”

It doesn’t require much searching to find evidence of McCrimmon’s point. The Wheat Kings took three consecutive 3-2 overtime wins over the Seattle Thunderbirds in the WHL Championship Series, getting overtime winners from Tanner Kaspick, Jayce Hawryluk and Reid Duke to take a 3-0 series lead on the Western Conference Champions.

The Wheat Kings look to keep the wins coming when they open their MasterCard Memorial Cup schedule against the QMJHL Champion Rouyn-Noranda Huskies on Saturday at 5:00pm MT/7:00pm ET.

“Every game is a Game 7 mentality from here on out,” said centreman John Quenneville of the matchup. “There’s no bigger time than right now in our junior hockey careers. There’s no time to wait around. When the puck drops on Saturday we have to be ready to go.”

Back for their fourth MasterCard Memorial Cup appearance in five years, the London Knights enter on a 13-game winning streak after a 4-0 Championship Series sweep of the Niagara IceDogs.

Bringing a talent-laden roster to Red Deer, the Knights feature a little bit of everything, headlined by the big trio of Mitch Marner, Christian Dvorak and Matthew Tkachuk with the first two entering action on 16-game point streaks.

Seemingly unstoppable throughout the OHL Playoffs, the Knights will face the hometown Red Deer Rebels in their first test on Friday night, something they’re certainly not overlooking.

“The first one is very important,” said OHL Playoff MVP Mitch Marner. “Every team is here for a reason and we have to be ready for all three, Red Deer included. They are a skilled and well-respected team.”

While the usual suspects have filled scoresheets across the Ontario Hockey League all season, the Knights have drawn from secondary sources of scoring throughout the playoffs. The third line trio of Owen MacDonald, Chandler Yakimowicz and JJ Piccinich has been particularly effective.

“Myself, JJ and Yak kind of found our groove,” said MacDonald, who enters his third MasterCard Memorial Cup after a trip to Saskatoon as a black ace in 2013 and another appearance on home ice in London in 2014. “We go out and do our thing. We work the puck down low and good things happen.”

MacDonald had goals in five straight games late in the OHL Playoffs while other lesser-known sources of offence such as reigning Pioneer Energy OHL Player of the Week Jacob Graves, typically known as a shutdown defender, found ways onto the scoresheet as well.

The Knights make their fifth appearance at the MasterCard Memorial Cup, looking to add to their crowded trophy case that includes one Memorial Cup crown. That title was won by one of the most prolific teams in CHL history in the 2005 Knights that produced current-day NHL stars in Corey Perry, Dave Bolland, Dan Girardi and several others.

“It’s the national championship and you want to go out there and do your best,” said draft eligible winger Matthew Tkachuk. “We’ve got the team to do this and it’d be very special for the city of London. We’ve only won this once in our team’s history and we’re going to do everything in our power to make this a second.”

The Knights go behind enemy lines for Game 1 on Friday, battling the Red Deer Rebels at a jam-packed ENMAX Centrium at 6:00pm MT/8:00pm ET on Sportsnet and TVA Sports.

An exciting year of firsts for the Rouyn-Noranda Huskies brings them to Red Deer for their first appearance at the MasterCard Memorial Cup in the team’s 20 year history.

“It’s a special team, you know. The first day I arrived this season I knew we had a great group,” said Perron. “We’re a team that is very close. At Christmas time Gilles (Bouchard) went out and brought in some big players to help us and things have just continued upward ever since.”

“We’re a fast team with three lines that can all score,” Perron continued. “Defensively we have an excellent top four that includes Jérémy Lauzon who will be coming back into the lineup.”

Lauzon, a second round choice by the Boston Bruins last June, has been out of the lineup since April 15th when he suffered a frightening injury, one that included a laceration of his neck.

“There’ve been some tough times, but I’m okay now and ready to play,” said Lauzon on Thursday. “I was very lucky with my injury. I’m just happy I can be here now to help my team.”

After making themselves known with just nine regulation losses throughout the regular season, the Rouyn-Noranda Huskies look to shine in the national spotlight at the 2016 MasterCard Memorial Cup.

The Huskies embark on their schedule against the WHL Champion Brandon Wheat Kings on Saturday at 5:00pm MT/7:00pm ET on Sportsnet and TVA Sports.

All nine games of the championship will be broadcast live on Sportsnet and  TVA Sports 2.