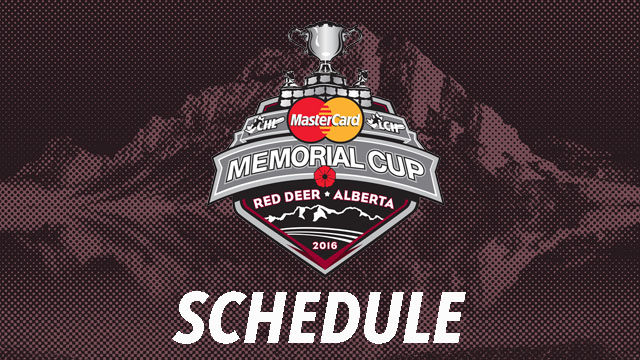 The Memorial Cup will officially be welcomed to the City of Red Deer on Thursday May 19 as part of a special Arrival of the Cup ceremony and celebration in the heart of downtown Red Deer beginning at 11:00 am.  The ceremony will serve as a tribute to our military and will allow the entire community to celebrate the start of the 10-day event.  Click here for full details.

All nine games of the championship will be broadcast live on Sportsnet and TVA Sports.

This season marks the first time the championship will be hosted by the province of Alberta since 1974.  Of the four competing teams, the Rebels and Knights have both hoisted the trophy once in 2001 and 2005 respectively while the Wheat Kings and Huskies are in search of their first title.

The 2016 MasterCard Memorial Cup is proudly supported by MasterCard, title sponsor of this event for 18 straight years.  Associate sponsors include BMO Bank of Montreal, Cooper Tires, autoTRADER.ca, and Bumper to Bumper.