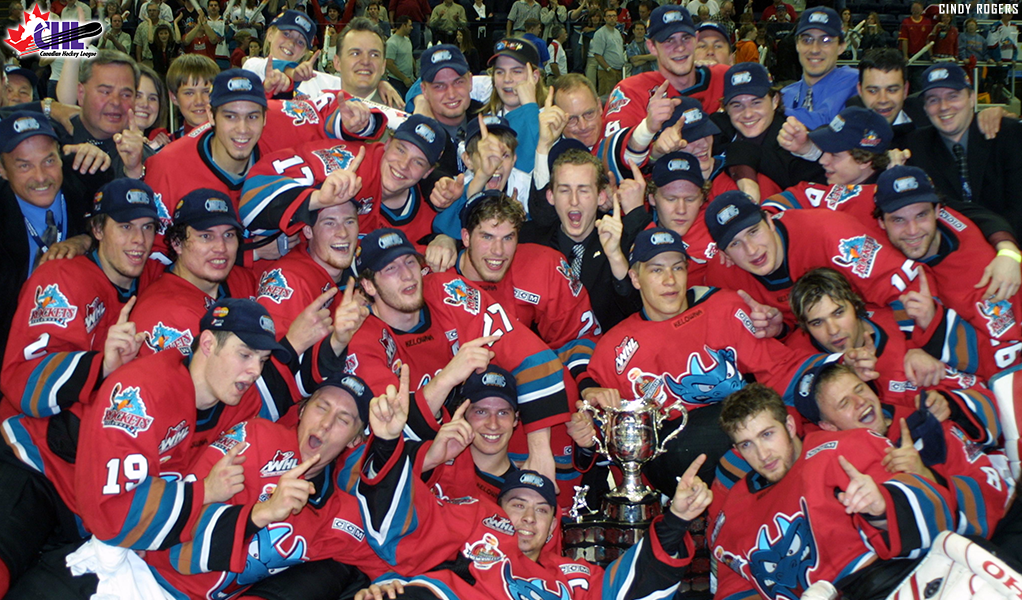 It was a championship team in the making.

After capturing the Ed Chynoweth Cup in 2003, the Kelowna Rockets took it one step further the following spring when the franchise hoisted the revered Memorial Cup.

Deploying a lineup of dedicated workers and experienced veterans with an unwavering commitment to team defence, the host Rockets prevailed against the Gatineau Olympiques in the 2004 Memorial Cup Final, bringing CHL supremacy to the Okanagan in only their ninth season since uprooting from nearby Tacoma, Washington.

“It was a team that (current Prince Albert Raiders head coach) Marc Habscheid did a really good job of coaching,” Rockets Owner, President, and General Manager Bruce Hamilton told the Canadian Hockey League. “He implemented a pretty good system from what we had. We had a pretty strong group of defencemen and that was the kind of game we had to play.”

Not to be forgotten, Hamilton highlighted the play of then sophomore netminder Kelly Guard who was the team’s difference maker throughout the playoffs and into the year-end tournament where he was nearly unbeatable in surrendering just three goals through four games while stopping a total of 99 shots, a spectacular showing that helped him take home the Stafford Smythe Trophy as Memorial Cup MVP.

Throughout the lineup of wily veterans however were a handful of players who went on to make an impact at the next level, a group headlined by dominant blue-liner and Montreal Canadiens captain Shea Weber, a natural leader who is currently skating in his 15th NHL season that has counted nearly 1,000 career contests and a host of accomplishments on the international stage as part of Team Canada.

Meanwhile, other key talents included captain and Kelowna native Josh Gorges, whose 13-year NHL career spanned stops with three clubs, including the San Jose Sharks, Canadiens, and Buffalo Sabres, where he wore a letter with the latter two. There was also longtime veteran forward and current Dallas Stars winger Blake Comeau, who has skated in 846 NHL games since making his pro debut in 2006.

“Weber, Gorges, and Comeau, those are quality players, and then we had a few other guys who went on to play in Europe and a number of guys who went on to university,” Hamilton detailed. “There was a pretty good mix, and in Weber’s case he was an exceptional player. Gorges and Comeau, just because they worked so hard, and that’s why Comeau is still playing today. Father Time caught up to (Gorges), but Comeau has been a really good story and is someone who doesn’t get enough play for what he does.”

In all, such on-ice success has helped build the Rockets into a prized piece of the Kelowna community.

“We went on a run of three or four years where you couldn’t get a ticket here after that which was really fun,” Hamilton added. “We had been to the Memorial Cup the year before in Quebec City and were back to the Memorial Cup in London (in 2005). This year will be our sixth that we have been involved. You learn something from each one and also learn and understand how hard it is to get there and to make sure you soak up the experience when you are there.”

A model franchise that breeds success, that expertise extends off the ice and is a key component as the Rockets ready to host the 2020 Memorial Cup Presented by Kia this May. Replicating the successes of the 2004 tournament – seen by many as the launching pad that helped build the Memorial Cup into the iconic showdown it is today – is certainly a part of those preparations.

“I think the biggest thing that happened here (in 2004) is it almost became like a festival because we tried to do so many things outside of the building to accommodate the people who couldn’t get in,” Hamilton concluded. “The parking lot out front was pretty much covered with a tent, and there was a secondary venue basically attached to the arena where a lot of people were when they couldn’t get tickets.

“The neat thing with our building here is it is literally across the street from the lake. Kelowna has a number of venues along the lakefront that are used for different kinds of events and we are going to do the same kind of thing this year with a lot of them. I think that is part in parcel where you have to have something else going on around it because there are 6,000 seats here and there is going to be more than that who want to be at the event.”