Four teams gathered in Hamilton to decide the 1990 Memorial Cup in the Copps Coliseum. However, the OHL’s Dukes of Hamilton, who were to have been the host team, weren’t among them.

The Dukes had won only 11 games, so the OHL sent along its champion, the Oshawa Generals, and runner-up, the Kitchener Rangers, to compete with the Kamloops Blazers and Laval Titan.

But the talk of this tournament was Oshawa forward Eric Lindros. With four games to be televised by TSN, the nation was about to get a look at Lindros.

Lindros, 17, didn’t disappoint; neither did the tournament. Four of the eight games went into overtime, two to double overtime.

Lindros had played only 25 regular-season games — he had been acquired from Sault Ste. Marie after refusing to report to the Greyhounds — and had 17 goals and 19 assists. In 17 playoff games, he had 18 goals and 18 assists.

In the end, the Generals gave Oshawa its first Memorial Cup since 1944, beating Kitchener, 4-3, on May 13 when Bill Armstrong scored at 2:05 of the second OT.

“I think every guy in this dressing room had dreamt about scoring the winning goal in the Memorial Cup final,” Armstrong said. “Sure I had dreamt about it. But, realistically, I never thought it would be me who scored.”

Lindros didn’t score in the tournament, but he did earn nine assists.

Oshawa head coach Rick Cornacchia admitted that he was most nervous in the first overtime period.

“All I could think about,” he said, “was that we were defending the goal at which every overtime goal in the tournament had been scored. I was worried.”

When the tournament began, the high-powered Blazers were the favourites, but they lost their first two games, both in OT, 8-7 to Kitchener and 7-6 to Oshawa.

On May 9, Laval beat Kamloops, 4-2. The Blazers, the CHL’s top-ranked team a few days earlier, were 0-3 and the first team eliminated.

Oshawa, meanwhile, had beaten Laval, 6-2, and then grabbed a spot in the final when Dale Craigwell’s goal at 4:16 of double OT gave it a 5-4 victory over Kitchener on May 10.

Kitchener, which had beaten Laval, 5-3, in the round-robin, moved into the final with another victory over the Titan, this time 5-4, on May 12.

NHL: Lindros played 13 NHL seasons including eight with the Philadelphia Flyers. He was a 1995 Hart Trophy recipient and registered 865 points over 760 career NHL games. He was inducted into the Hockey Hall of Fame in November 2016 and had his number 88 retired by the Flyers in January 2018. Teammates Brathwaite and Craig also enjoyed NHL careers, with the former spending nine years in the league while the latter skated for seven. 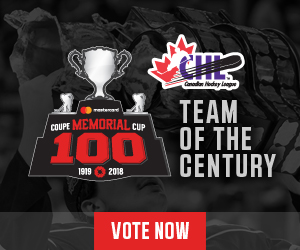